Today was more typically Parisian weather–grayish with the hint of rain. (Yesterday was uncharacteristically bright sun). Ellie and I went to the neighborhood outdoor market this morning, where the men flirted with us (yes, me too) and I made one vendor’s day by telling him “les francais sont toujours gallant.” Needless to say, he threw in an extra piece of sausage for Ellie.

Then we went flaner again. This is an untranslatable word that means to walk about with no particular goal in mind. Actually, we did have a rough destination in mind–the marchė d’aligre. We got lost along the way and were sent in the wrong direction by a man trying to be helpful who consulted his iPhone. The funny part was we weren’t more than a half mile from our purported destination.

Anyway, we did get to the market, which was a bit disappointing after the covered markets of Italy and southern France. But we wandered into a charming Corsican restaurant for lunch where we had a tomato salad with Corsican cheese, a bavette (kind of like a hangar steak) that was free of fat and gristle and so delicious I didn’t really want to share with Ellie. Plus green beans, frites, a pear tarte for dessert and a quarter bottle of tasty Corsican wine. Corsica is definitely on my list of future destinations.

Sorry no photos but even my little ipad is too heavy given the distances we are walking.

I really don’t understand why dogs in Paris are allowed in restaurants but not in parks. The neighborhood where I am staying (12th arrondissement) has a beautiful park right next door, but chiens interdits. Same thing at the huge parc Bercy. And the promenade plantėe, which is also next door.

I must have walked Ellie 3 miles today. I wanted to get acclimated to my new surroundings and so first we walked south. We saw the recent Gehry building where the cinematheque now is situated and then crossed the Seine on the Simone de Beauvoir bridge to see the very ugly new bibliotheque nationale. Unfortunately, the bridge had many steps, which I had to carry Ellie up, and then it was planked and Ellie’s paws kept getting stuck between the slats, so I carried her some more. We walked back (Ellie too) across the pont de Bercy and then rewarded ourselves with lunch at a brasserie, of croque Monsieur and frites. And a beer (for me).

After a brief siesta, we headed west. I looked in the windows of the artisans’ shops below the promenade plantėe. We stopped for a manicure (for me, not Ellie) and Ellie is now sacked out.

It finally stopped raining long enough for Ellie and I to walk around town this morning. Here is what we saw. 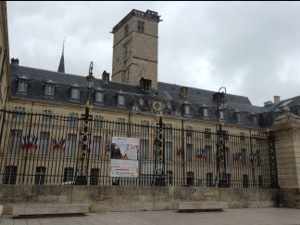 Burgundy is to France what Bologna is to Italy–its stomach. When we think of french food–escargots, coq au vin, boeuf Bourgogne–it is Burgundy we are thinking of. So today, we paid hommage to Burgundy cuisine by having lunch at a michelin starred restaurant. It began with amuse bouches of ham flan, the best cheese sticks you can imagine and a mousse of fennel. Then a cold gazpacho of eggplant. Finally the first course. For abby it was quenelles de brochet, another burgundian speciality which is like gefilte fish as it would be served in paradise. Ian and i had warm duck in a pate aux choux with red wine sauce. With these, we each had 2 glasses of St. Veran, a white burgundy. For plats, abby had guinea hen and ian and i had braised veal. Lovely. My wine was an extraordinary Gevrey-chambertin. Then came a salad with an Epoisses cheese bathed in Marc. Ellie probably got drunk from it. Then a series of small sweets (cheesecake mousse, pistachio chocolate petit fours, etc), followed by the actual dessert (nougatine in raspberry sauce) followed by truffles, and in my case, by a local plum liqueur. What a feast. And the staff were lovely. The owner had come to New York a few years ago along with an exhibit of alabaster tomb statuary that had been installed at the Met.

The morning began with my getting lost several times, on foot, Ellie in tow, in the drenching rain. Then I took Abby and Ian by car to the train station where they left their luggage. (They are going on a week long barge cruise from here). It took us over an hour to find it, so we got a tour of some of the less interesting parts of Dijon. The centre ville, by contrast, is amazing, mostly 17th and 18th century. I did not take many photos because it was raining so hard I was afraid I’d ruin my ipad. After lunch, Ellie and I walked home, getting lost but finding a wine store. I left Ellie here to go find the car so I could move it, and walked around the central square 3 or 4 times before I could find it.

Now enjoying the wine and will have bread, cheese and wine for dinner. If I ever eat again. 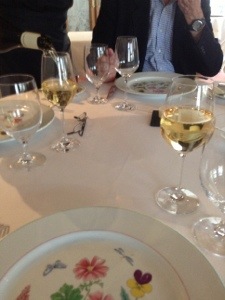 We spent our last day in Sanary cleaning ( mostly Abby, bless her). Today we were on the road from 10 am to 7 pm. Finally arrived in Dijon, dropped Abby and Ian at their hotel and then drove around for 20 minutes trying to find mine–less than a quarter mile away. What a beautiful place–a17th century building on a courtyard and mine is the only public space ( it is called appartements a part because it is really a private apartment). It was pouring and I didn’t want to wander far. Lucked into a lovely Portuguese (!) restaurant where I had delicious veal and vegetables a la plancha and a bottle of Portuguese wine. Ok. Not the Macon I had in mind, but he let me take the half-empty bottle back home, where I added some local cassis that had been left for me. Tres contente.

Today Ellie didn’t get to go with us. She stayed at home with Abby while Ian and I drove to Aix. We found our way without much trouble and had a pleasant walk up the cours Mirabeau and then into the old town where we had lunch. We had a kind of mezze of Provençal specialties: ratatouille, goat cheese in phyllo, and little cream puffs stuffed with tapenade. We visited the remains of the Roman baths, then had coffee and ice cream. In short, a pleasant day.

Poor Abby and Ian. They had agreed to go with me to Nice yesterday to exchange the contract on the rental car (long, boring story). Nice is theoretically a 2 hour drive from Sanary–straight shot on the autoroute.

However, I had the bright idea of getting off the autoroute in Cannes, so they could see a bit of the riviera. Needless to say, I got hopelessly lost and never did find la Croisette, though I did give them a tour of the back alleys of Cannes. Once I found my way to Juan-les-pins, I had no trouble finding Antibes, where we had a simple lunch (moules for Abby, veal for Ian and me) and showed them the city by foot.

Then back in the car where I missed the road I wanted and ended up in a miles long traffic jam. We finally got to the Promenade des anglais only to make a wrong turn heading for the train station and europcar. Finally found it only to drive right past the parking lot. Then many minutes navigating 1-way streets barely wider than the car, topped off by a hair-raising trip up a narrow, curving ramp to the 6th floor of the parking lot. Total transit time (one-way): 5 hours.

Ian drove us home where Abby picked up a pizza and we all got drunk. We agreed that the area around Sanary is far less developed and thus more picturesque, than the Cannes-Nice axis. Glad to be back in the Var.

Abby and Ian arrived yesterday and after a pleasant dinner at home, they crashed. Today we went to the market, where, among other things, we bought wild boar filet. This afternoon we took a boat trip to an amazing park along the sea, made up of natural rock formations known as Calanques. They are similar to fjords, deep gorges carved into cliffs that one can sail into. See photos below. 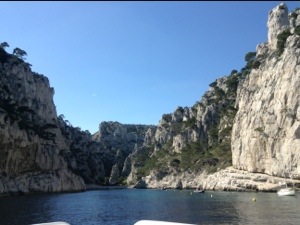 Ellie and I went to the beach in Bandol this morning. It was too cold to swim but Ellie ran on the beach with utter abandon.
This evening Sophie and Pascal took me to Le Castellet, another village perchė. We had a wonderful dinner–veal tartare, pork in a sage sauce, and poached pear. Below are photos of Sophie, pascal, and the restaurant owner, and another of the view. 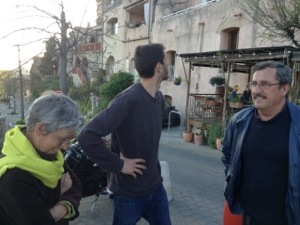 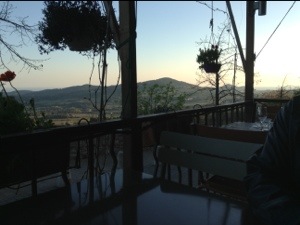 Alexandra asked to see the haircut. Here I am at the cafe, with one of my “circle” and the cafe owner.